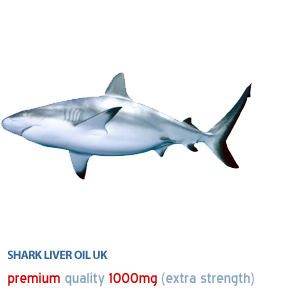 Oil derived from the livers of deep-water sharks shows some promise in fighting cancer and boosting the immune system. Until a decade ago, when a growing number of supplement manufacturers began to take an interest in this nutritional aid, most shark livers were routinely tossed overboard. Today, several companies harvest and process the oil from sharks caught off of Greenland, Norway, Sweden, and other coasts. The oil is available as a by-product of the commercial fishing industry; endangered sharks are not allowed to be killed solely for their oil.
In centuries past, Nordic fishermen used shark liver oil as a folk remedy to heal wounds and fight the flu. Japanese seamen called it samedawa, or "cure all." Interestingly, a new use emerged in the 1950s, when a Swedish doctor noted that children with leukemia who were fed calf bone marrow showed some protection against the adverse effects of radiation. Investigation revealed that the calf marrow?s therapeutic actions were due to natural immune-boosting compounds called alkylglycerols, also present in notably high concentrations in shark liver oil.

Alkylglycerols are naturally found in much lower levels in the bone marrow, liver, spleen, and breast milk of mature cows as well as in humans. Much of the medical interest in shark liver oil--as a potential complement to standard cancer treatments and as a natural immune booster--has focused on these promising compounds.

Shark liver oil also contains squalamine, a substance which in animal studies has shown some ability to fight cancers of the breast, lung, brain, and skin (melanoma specifically) by choking off the tumor's blood supply; studies in people are under way. Shark liver oil capsules sometimes also contain generous amounts of squalene, an antioxidant and bacteria-fighter. Also present are omega-3 fatty acids (the heart-healthy oils found in other deep-water fish) and vitamin A.

There are several books about the health benefits of shark liver oil, all of which basically extol the virtues of the product. Even though these books are written by M.D.s and Ph.D.s, in actual fact, most of the information is based on either patients relating their successes or limited lab animal studies. This does not mean the product has no value, but rather that based on clinical trials in humans, there?s little hard evidence about the effectiveness of shark liver oil for any condition. As such, there are no formally established dosages for shark liver oil, and the WholeHealth MD recommendations below follow guidelines set forth in these books.

Note: Shark liver oil is distinct from another popular supplement that comes from the same fish: shark cartilage. This purported cancer fighter was popularized several years ago in the best-selling book Sharks Don't Get Cancer. Results from studies on shark cartilage and cancer have been mixed and are ongoing. Shark liver oil, however, contains potentially therapeutic substances different than those found in the cartilage.